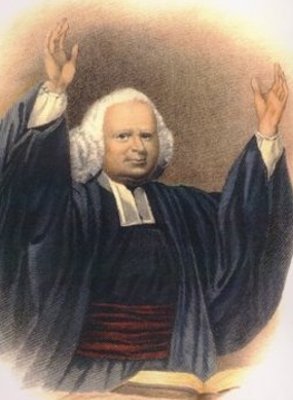 George Whitefield was a British evangelist who ignited the eighteenth-century spiritual revival known as the Great Awakening. His preaching captivated thousands, and he was the most famous person in the thirteen colonies. Whitefield was a close friend of Benjamin Franklin, who published his sermons, and is often considered “the forgotten founding father.”

The George Whitefield Medal was created to celebrate the 250th anniversary of his passing on September 30, 1770, in Newburyport, Massachusetts. As Whitefield’s “home church” and final resting place, Old South Presbyterian Church is commemorating this anniversary with a variety of online events featuring internationally recognized preachers and scholars. Please see whitefield2020.com for more information.

All proceeds from the medal go towards supporting Old South’s Historic Restoration Fund.

Reverse:  AMERICA’S SPIRITUAL FOUNDING FATHER,
The epitaph that is on the plaque in his crypt:
“I AM CONTENT TO WAIT TILL THE DAY OF JUDGEMENT FOR CLEARING UP OF MY CHARACTER AND AFTER I AM DEAD I DESIRE NO OTHER EPTAPH THAT THIS: HERE LIES G.W. WHAT SORT OF A MAN HE WAS THE GREAT DAY WILL DISCOVER”

A Brief Biography of George Whitefield
Rev. George Whitefield, Calvinistic Evangelist, was born in the Bell Inn, at Gloucester, England on December 16, 1714. The circumstances of his early life were not favorable to his becoming a righteous man. He had a fondness for elocution and acting. This, he practiced to a considerable extent.

With the money he received, he used to buy books, which were of great use to his soul. He went to Oxford at the age of eighteen and became associated with John and Charles Wesley, and others, in what was known as the “Holy Club.” Their austerities and charitable endeavors among the poor attracted general attention.

In response to an urgent appeal from John Wesley, he came to Georgia as a missionary. The United States, then a line of English colonies, became for him a land of opportunity and fruitful labor.

He arrived in Newburyport in September 1740. The revival that followed his labors, brought into existence Old South. He crossed the Atlantic thirteen times and preached more than 18,000 sermons. His audiences often numbered as many as 15,000 people.

All did not take kindly to his words, for on one occasion a stone was hurled, which nearly struck the Bible from his hand. His reply reveals the greatness of his spirit.

“I have a warrant from God to preach. His seal, — (holding up the Bible), is in my hand, and I stand in the King’s highway.”

Benjamin Franklin, after hearing him preach, made this comment:

“His integrity, disinterestedness, and indefatigable zeal, in promoting every good work, I ha’ never seen equaled, and shall never see excelled.”

His activities continued to the evening before his death. In response to the appeal of the people gathered on School Street, outside of the home of Parsons, he preached to them from the staircase, — “until the candle, which he still held, burned away, and went out in its socket.”

At six o’clock on Sunday morning, September 30, 1770, he passed into eternal glory 30 years to the day after his first visit to Newburyport.

Today he rests eternally, according to his wishes, in a crypt under the pulpit of this Church that he helped found. 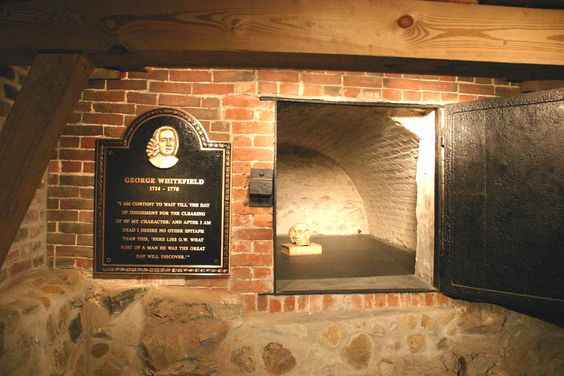 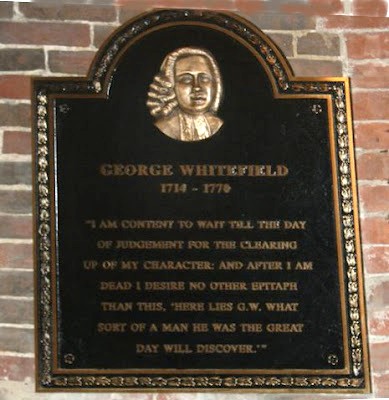 Coin Replicas © 2023 | Website Design and Development by The Web Dude.